Tis is the season and all that.

Thought I’d end the year with a festive title at least, even if the content isn’t necessarily Christmassy. Bear with caller…

So, I recently went for some ‘spiritual healing’ and without going too deeply into it, I felt ‘blocked’. Emotionally, physically. And no, I didn’t just need a big poo and a cry. (I had already tried that.)

I had never been to a healer, so had no level of expectation, but after just one session, I knew I would be back. I got so much out of it – lots of questions answered, chakras aligned (they were a mess and I don’t ‘do’ untidy) plus an incredible feeling of lightness, more than any massage could give.

We discussed the different findings of my session, one of them being something that the healer couldn’t put her finger on (pardon the pun) with regards to my eyes. I said that it may have been my ‘lens implants’, as when I was 16 and had cataract surgery. I wrote about it once before. (There’s a marvellous dessert recipe featuring waffles, white chocolate and raspberries.) 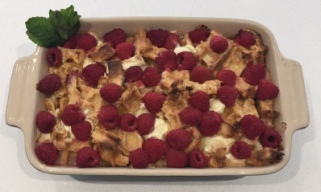 The other explanation was that I had been procrastinating about having an eye test. And I really had. Was my vision worsening or was I just going to bed far too late each night and spending too much time on my phone/computer/current book?

I left the session and immediately booked an appointment with my optician for the following day.

Because I am really cautious about my eyes, there is only one person for the job – an independent optician called ‘Ben Mirkin’ in Brent Cross where I see ‘Rod’.

I had brought my glasses with, giving them a thorough clean before heading in. (Same as when I brush my teeth for about five minutes, swilling mouthwash and then some rigorous gum-bleeding-inducing flossing right before seeing the hygienist. The shame of it.)

From my many visits over the years dealing with my ‘mince pies’ (come on, cockney rhyming for eyes!), I should be well used to the opticians by now, but I think I’d rather have a filling at the dentist. Okay, a bit dramatic, but I really don’t like going.

First off,  the ‘chair of doom’. I hate that high chair.

It reminds me of the bit in Superman 3,  with the Vera, the highly strung sister. I just feel trapped and suffocated behind all that machinery put in front of me.

I can’t deal with all the questions. My brain goes into overload and I need more time than the allocated appointment slot to decide whether ‘red or green’ is clearer.

It’s bad enough with the letters…

Then they bring out the crop circles…

All I see in my head is the snake from ‘The Jungle Book’.

The only bit I don’t mind, is reading the letters out line by line.

Past that, it’s all downhill. When they start shifting dials and adjusting the machinery – ‘better like this? or like this?’

Can you just do it again once more?

The bit where they make you wear those weird lenseless specs where they slot in the lenses that you’ve just agreed to as your ‘perfect vision’? Then they come at you with the swivelling lollipop stick and do alot more ‘one?.. or two?’

If I think about it though, all that stuff is the easy part.

It’s what comes next…

The bit they get you with right at the end…

I said ‘tenometer’, but he’s definitely had it done and even he’s scared shitless

This machine has the capacity to render me useless for about 20 attempts. Per eye.

“Tonometry is the procedure eye care professionals perform to determine the intraocular pressure (IOP), the fluid pressure inside the eye. It is an important test in the evaluation of patients at risk from glaucoma. Most tonometers are calibrated to measure pressure in millimeters of mercury (mmHg).”

Translation: “I shall now puff air right onto your eyeball.”

I believe this to be the worst form of torture known to mankind.

I would actually rather eat a mince pie.

But would prefer one of these:

I made them a couple of years ago for the school Christmas fair and blogged about here.

Chop the Mars bars up and melt with the butter in a microwave for 3-4 mins on medium.

Roll into golf-sized balls. Add a Malteaser in the middle of a few of them (yassssssss!) – finders wins prizes! (Ensure you actually have prizes.)

p.s. Thanks for all the blog love this year. It means loads to me because I love writing – it makes me happy. And if it makes someone smile, then that’s a bonus.

p.p.s. I actually detest mince pies. I don’t know if it’s the chopped fruit or the Christmassy spices, or the fact that for years I thought it was a actual beef mince meat inside. Either way, not for me.

p.p.p.s. Eyes are all good. Perfect in fact, as no change from last eye test.