The impending UEFA final is like the equivalent of a long car journey filled with a continual dialogue of, “Are we there yet?”

No. Not quite. But nearly…

Although to be fair, I am re-living the Amsterdam trip on a daily basis via his numerous iPhone footage and every bit of tv coverage from the match. (My Sky planner is full of it.)

I swear he has re-watched this more than our wedding highlights.

“Doll, we were down and out. It was one of the greatest comebacks in European football.”

It’s like a broken record. And I know every song. (How do they all learn them? Who sits down and writes these ditties?)

It’s completely my own fault though. I knew what I was in for when marrying him (see earlier blog for more info).

Spurs is his addiction and who am I to stand in his way. (Trust me, he would throw me overboard faced with a decision of making it to Madrid or saving his wife.) 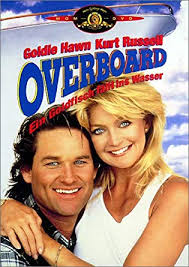 He comes from a family of Spurs season ticket holders. As does my dad, who regaled me with wonderful stories of going to matches. In 1946, my grandpa Davis bought up a row of season tickets for the men in the family, at the hefty price of five guineas each. Block L, High Road entrance. On match days, Grandpa, his brother, my dad and his three cousins would jump on the 102 bus from Muswell Hill to Angel Edmonton and then walk a couple of miles down High Road to the ground.

The first UEFA cup was in 1971 so there was very little European travel for dad, but a big memory for him would be the FA Cup semi final in 1948 – Spurs vs Blackpool. On a train packed full of loyal supporters, headed up to Villa Park to watch Spurs lose 3-1. If that wasn’t bad enough, he remembers his Thermos of tea leaking all over his cheese sandwiches. 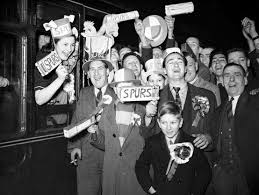 Spurs have suffered some pretty dismal losses over the years, so hopefully they are on to a winning streak. When they made it to the recent UEFA semi finals, my husband had pretty much mentally booked the flight to Amsterdam before the first crestfallen Man City supporter had left the ground.

As a woman, I would have approached this process very differently: first, check for accommodation. Then look into flights.

But no. Husband booked the flight first and where to sleep (if at all) came a very delayed second action point. He genuinely didn’t seem to care if he slept at the airport. There are grown men without accommodation, buying up blow up beds to take with them to Madrid. Lunatics.

And the tickets? You haven’t even got a ticket yet ffs!

To be fair, he had been in a similar situation before… 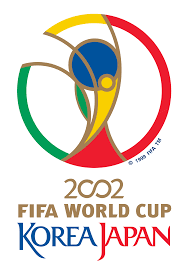 He’s just as passionate about his country’s team and managed to round up two like-minded souls, announcing,

“Doll, I’m going to Japan for a couple of days.”

Oh, how I laughed. No-one does that. It’s lunacy.

But off he went. Filled with hope and ‘possibly’ some medication that his travel buddy had given him, to ease the pain of travelling in economy for eleven and a half hours. (He’s 6 foot 4 – the legroom situation is agonising for him.)

They landed in Narita, exited the airport, stuck their bank card in some dubious World Cup ticket machine and crossed their fingers. It was a big risk – they had booked a package deal via their hotel which included flights, accommodation and apparently, tickets to the game.

As if by some FIFA miracle, their match tickets popped out! There was much celebration, but it was short lived. Michael Owen did his best, but England were knocked out after that first match.

It’s not quite coming home

But back to the pending Madrid trip.

Fellow fans who didn’t make it to the ‘Dam are fully on board for this, the final leg. Once again, flights were secured before even worrying about tickets. Let alone what it was clashing with..

This weekend I know of birthday parties, sweet 16’s, weddings, bar mitzvahs… this is majorly testing many friendships. As a guest it’s hard enough, but imagine if it’s your own do!

I clearly remember a friend’s wedding.

All that planning. The attention to detail. As the groom walked down the aisle towards the chupah, he looked so nervous and full of hope. As he reached his bride to be, leaned in to his best man and whispered, “What’s the score?”

So, as this weekend approaches, the lucky ones among them are flying direct to Madrid, but not everyone has such a simple route. There are different levels of superfan heading to Spain…

Planes: Flights to Malaga followed by a short drive.

Trains: Eurostar to Paris followed by a drive.

Automobiles: Driving from London. Without a ticket.

I mean, good luck. Good f’ing luck to them. It’s an experience. And I quote: “the biggest club competition you can be in. Liverpool have won it five times. Spurs have been nowhere near.” End quote. (Husband dearest.)

‘Audere est Facere’ as the shirt declares. “To Dare Is to Do”.

And while he dares, I will do. Making sure there is a celebratory/consolatory bit of grub upon return. I made this recipe when he arrived home from Amsterdam. And it went down well. I now call it my ‘lucky drip beef recipe’…. 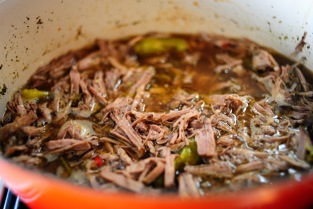 Watching friends’ (and complete strangers’) social media feeds with all the goodbyes to their University-bound offspring, is giving me ‘all kinds of feels’.

I have two girls and whilst I am a fair way off that ‘Insta-moment’, I hope that one day they will head off to University to study their respective passions. (Currently no known degrees available in ‘Slime Management.’)

I just can’t imagine them fleeing the nest. What will they eat? Will they clean their rooms? Will they wash their bedlinen properly and use a fabric sheet in the tumble drier?

I have pretty clear recollections of that journey up to Manchester where I was off to study ‘Design & Art Direction’ for three whole years.

I remember the liberating feeling of gathering ‘bits’ for my new Northern life. I saw one friend recently doing the University shop for her triplets – TRIPLETS!!! No wonder the duvet cover selection in Primark was empty. Clean sweep.

My ‘digs’ were called ‘Student Village‘, right in the centre of town.

We were the first group of students living there, so everything was brand-spanking new. Chairs not sat in, toilets not shat in. A pretty good start I’d say, compared to the horror stories of student accommodation that some friends were opting for. 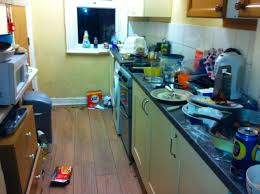 Standard. At least the bin’s not overflowing.

We were ‘the lucky ones’.

Four of us from London were sharing a ‘mini flat’ – you had a front door with a shared bathroom and kitchen, then your own bedroom.

As I nervously navigated my way through the airless corridors, I found my room and was greeted by my friend in room C330, who was just unpacking the last of her stuff in her room – spacious, big, bright.

My room? C331. Dingy, Narrow. Dark. The other two rooms in our flat were pretty decent by comparison, so I had truly got the shit deal.

Can I go home now please?

I honestly couldn’t think of a worse living space to be in and was contemplating leaving for London, with my friend’s dad who was about to head back.

Seeing the disparity in our rooms, and the devastation in my eyes, friend’s dad got to work. It was all very Mission Impossible, but with less dangling from ceilings.

This mission was possible

With a handy background in security, he changed the lock cylinder between my poxy box room and room C329, one of the other two vacant rooms. (sigh, let me explain…)

So, basically, my original key still fitted in the lock, yeah? With me so far?

We simply shifted the lock barrel out of my original room (C331) and swapped it over with that of the more preferably room (C329).

Capiche? (Come see me at the end of the blog if still unclear.

Oh, and we also prized off the door numbers and swapped them over too. If you’re going to do a job, do it properly.

Thinking back, it was proper criminal stuff. I could have got thrown out day one. get me! The student rebel.

I’m not saying I ended up with a south-facing garden and en suite bathroom, but I really loved my new room.

My room. Not actual, but very similar

It was glorious, with its basic furnishings and scratchy pube-style, stain resistant carpet. I decorated the shit out of it with every rave poster I could find on the streets of Manchester. 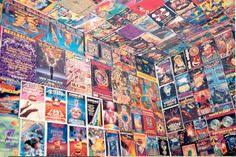 Pretty much my bedroom

A whole happy year was spent in those halls, which even included a prison style riot. Over what, I can’t actually remember. One day everything just went a bit mad and people were chucking all kinds of shit out of their windows. Chairs, crockery….I think I threw a ream of paper. See? Rebel, I told you earlier.

The scholastic year came and went and the time was right to move out into the suburbs, where all the second years headed to for added ‘independence’. (Read as: smoking weed without a central smoke alarm going off in the building. More about that later…)

I’ve mentioned it before – so I’ll touch on it again – but I lived in a house with a group of 6 girls, our strong bond formed through living out our year spent at student village. 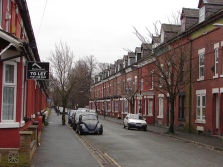 The walls were held up with more blue tack than the entire chain of WHSmiths.

I don’t even remember cleaning the fridge for the entire 2 years I lived there. Let alone mopping the floor.

The basement was more of a damp coal cellar where one housemate would sit at her sewing machine ’til the wee hours, to work on her Textile degree. (And it actually smelled of wee in the basement.)

We were all the same though – one friend had a futon in her room whereby you literally couldn’t see the difference between the edge of her bed and the piles of stuff all over the floor. It was just all ‘one level’.

Do people even buy futons anymore?

Another friend would have these mad blitzes every now and then, where she would literally empty her entire room out into the hallway (brilliant for fire safety) and go for a mad clean up.

It wasn’t all disgusting though. There was some level of pride in our student schmutz. One flatmate had a glorious collection of trolls (the original ones, 90s style).

The rest of the room could have been a pigsty, but the trolls were neat and tidy at all times. Until one nasty boy visited and chopped all of the trolls’ hair off. Literally scalped each and every one of them. Conniving sod that he was, he carefully placed each ‘troll toupee’ back on top of their heads, so my friend was none the wiser until the weekly cleaning ceremony, when she went to pick them up by theirbeautiful tufty hair. She was livid.

Good luck to all those starting University. And try to wash your sheets once a week

P.s. No-one ever found about ‘room swap’. Until the day some of us were in my room and it got a bit smokey…ahem… and the building fire team came up to investigate why my smoke alarm went off.  Except they went to my original room, because that smoke alarm was still assigned to room C331.